It is with much pleasure that we introduce a new area to our holiday portfolio.

Three years ago, Jill Pinkerton moved with her lovely Pete to Spain – the hinterland of the coast close to Alicante- near enough to fly home for both of them.

After settling in , they began to explore the area- and found the lovely area called La Marinas – part of Valencia region. They came across many beautiful areas – and now we can launch our first mainland Spanish holiday

The area of Castell de Castells is truly beautiful- an old Moorish village surrounded by four mountain ranges, rolling hillsides, dramatic gorges and amazing rock formations. It is also home to a World Heritage Site containing cave paintings over 5,000 years old. There are so many fabulous walks to choose from in this area and importantly straight from our hotel door.

Yes- the Costa Blanca has mountains and yes, the Costa Blanca offers the most incredible, unspoilt paths and trails. They offer you a vast array of good hiking – the best part is that this area is a hidden gem. That’s why we are excited to add it to our Secret Hills portfolio- and to offer you the opportunity to see and taste the real authentic Spain.

Since the 1960’s, the Costa Blanca area has always been a favourite destination to many -known for its beautiful turquoise coastline and busy holiday resorts. The advantage is that it is the just two and a half hours flying from numerous UK local airports. Add that to the fabulous climate with 300 days of blue skies and glorious sunshine.

Within thirty minutes inland from the beaches and packed coastal resorts, a completely different world opens. There are many mountains higher than Ben Nevis -rocky beautiful limestone mountains that stretch away in a mainly east-westerly direction featuring long chains of limestone ridges (Sierras) divided by deep canyons (Barrancas). These are the Marina Alta mountains with their slopes clothed in pine scented forests or olive and orange groves. The valleys are dusted with the delicate pink and white blossoms of almond trees in the spring, with beautiful scents each day as we walk. These will stay with you long after you return home.

Hidden amongst these hills are gently rolling valleys and typical traditional white stone Spanish villages and farmsteads. Our hotel is situated in one of these traditional villages far away from the hustle and bustle of the Coast. The story of the Costa Blanca is etched into its landscape, the names of its villages and the faces of its inhabitants. The earliest evidence of man is to be found in the cave paintings dating back more than 5000 years close by to our hotel.

The embryonic footpath network is often based on centuries old trading routes dating back to the long occupation of Spain by the North African Moors with their old cobbles and steps. The area has many ruins of castles and watchtowers perched on rocky towers. The Costa Blanca is steeped in history, diversity, and richness.

In this ancient land, we base our holidays – a walker’s paradise – allowing you to SEE and TASTE the REAL Spain.

So- join Jill and Pete – and their hosts at the Serrella Hotel – for an unforgettable holiday. Be the first. 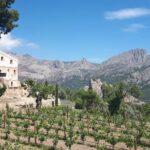 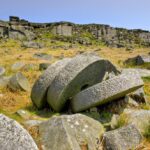