Isle of Purbeck and East Dorset

Our solos guided walking holiday takes in the stunning Purbeck Hills – one of the finest landscape features in Dorset. They extend from the much eroded Handfast Point (or The Foreland) in the east for some fifteen miles to the cliffs of Cow Corner and the lonely cove of Arish Mell in the west. These chalk hills are not a continuous ridge, but are broken by the gap at Ulwell and the twin gaps at Corfe Castle. Seen from a distance these surging blue hills owe their character to the rounded outlines that billow between the gaps. Their highest points are Godlingston Hill in the east, and Ridgeway Hill in the west,

“If one wanted to show a foreigner England, perhaps the wisest course would be to take him to the final section of the Purbeck Hills, and stand him on their summit, a few miles to the east of Corfe.”  So wrote E.M. Forster in Howards End. The section he had in mind stretches from Corfe Castle to Ballard Down, overlooking Old Harry, with its views over the Studland peninsula and Poole Bay as far as the Isle of Wight.

A theme in Howards End, published in 1910, is the creeping urbanisation of southern England. Forster lists the Purbeck Hills among a dwindling number of ‘survivals’ standing firm against the red brick tide, and he is pessimistic about their future.

Fortunately his pessimism was unfounded, in this instance at least, and they remain unspoiled to inspire us.

See more about The Isle of Purbeck – http://www.isleofpurbeck.com/ and https://www.dorsets.co.uk/purbeck

On this holiday we visit Corfe Castle, Durdle Dooor and Lulworth Cove as well as sea cliffs close to Worth Matravers, a superb inland village. 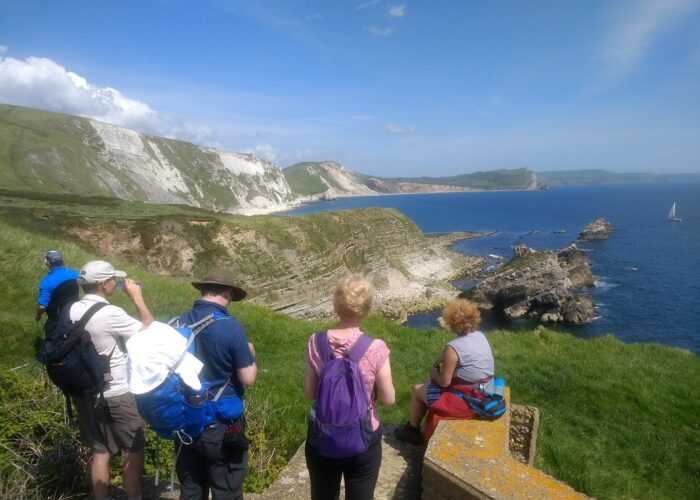 Isle of Purbeck and East Dorset