When you book with an account, you will be able to track your payment status, track the confirmation and you can also rate the tour after you finished the tour.
Sign Up
Save To Wish List

When you book with an account, you will be able to track your payment status, track the confirmation and you can also rate the tour after you finished the tour.
Sign Up
220

If walking is your passion and you never tire of stunning views,- then this area is for you. Renowned for the surrounding hills and the River Dee, Llangollen has something for all our clients.  But it is its magnificent position amongst the hills surrounding the town, and the delightful Dee Valley that we want you to experience. Our solos guided walking holiday shows you the best of this diverse area.

Our unique speciality is solos and Singles  Guided Walking.  We walk in some of the most stunning locations in both the UK and Europe. We have an extra speciality in that we also design bespoke holidays for special groups.

What you get on a Secret Hills Break

Accommodation en suite rooms at the Hand Hotel, right in the centre of the Llangollen. The hotel has a bar, and several  lounges. Four nights stay.

Dinner –Is three course in the hotels restaurant

We have lunch at one of the lovely country pubs in the area, .

We offer you the opportunity to stay additional nights, and many people extend their weekend as they wish. Just reserve what nights you need.

Great reasons to join us

There are other walking holiday companies that cover the countryside but we believe we offer the best value for many reasons….

Llangollen is situated on the A5 trunk road. From the south and west – take M5 then M54 headed for North Wales and Shrewsbury- this turns into the A5 and follow to Llangollen.

The hotel is a sharp right turn just before the main traffic lights in the town.

The nearest station is Chirk- taxi’s from there to Llangollen – 6 miles.

We meet at 2.30pm on Sunday afternoon for a 2.5 hour walk around the surrounding area and along part of the Llangollen canal

Walking and talking – its our unique way of bringing people together – Meeting new friends.

Its all about meeting new friends. Each holiday is designed to be a friendly, relaxed and stress free occasion. Talking is as important as walking on Secrethills Walking Holidays. We don’t go in for discos, we may use an event that is taking place in the area we are in to boost the weekends activities – but its good, old fashioned chat that makes our short breaks successful.

You might be surprised by what fun you’ll have with people who are older or younger than you during a holiday with us, and that’s exactly the sort of atmosphere we encourage; people find it very rewarding. It doesn’t matter what your reasons for traveling with us are, we’ve had people who are single, divorced or widowed, people who have partners that are unable to travel, and people who can’t holiday with their friends anymore as they’ve all got married themselves. There are people who want to make friends, see sights, and experience something completely new. Whatever your reason, we’ll welcome you with open arms and our friendly hosts will help you to get the most out of your holiday.

Oh – by the way – its not a dating agency – over the years we have had people meet and fall in love – but that’s just chance. Our aim is that you make like minded friends – just relax and enjoy.

To reserve a place on any of our holidays, please follow these simple instructions.

Reserve online  – once you have chosen your holiday, click on Proceed Booking and complete the online form. If you have difficulty reserving online, please  contact us (tel: 01694 723600, email: info@secrethillswalking.co.uk) and we will assist you to complete your booking.

Please note we cannot take credit/debit card details over the phone. You may pay by the following methods when you book online…

Please note than an initial deposit is required with each booking regardless of which payment method you choose. Your booking will be accepted when your payment (deposit or full balance) is received. Note – if you are reserving a holiday within a month of the start date then the full amount is due immediately and no deposit should be paid.

Llangollen -a small town of some 3000 people and is seeped in myth and legend. In many ways it is best known for hosting the Llangollen International Musical Eisteddfod every July which brings in some 120,000 visitors and turns the town into a vibrant international stage.

As with so many ancient Welsh towns, it takes its name from its founding Saint; Collen, a seventh century saint. Llangollen, was established in the 7th Century when The monk St. Collen was instructed to find a valley by riding a horse for one day and then stop and mark out a “parish” a place to build his hermitage or cell in the custom of the times, with tiny church, hospice and outhouses all enclosed within a wall.

The famous Dee Bridge, was built by Bishop Trevor of Trevor Hall in I345. It is a scheduled ancient monument and was widened in the 1960’s to accommodate modern traffic.

Up to the I9th century Llangollen town was located south-east of the bridge around Bridge Street and Church Street, and to the north-west around the old village green, which has now disappeared , but is remembered by such names as ‘Green Lane; and ‘Green Lodge’ which still exist. Nearly all of this densely populated area disappeared to allow the building of the Railway.
Llangollen became important because of its prominent position on the main London to Holyhead coaching road which was improved by Thomas Telford from 1815 and continued for some 15 years. The Canal was also constructed around this and combined to bring considerable immigration into Llangollen during the early part of the 19th century.

The remains of Castell Dinas Bran can be seen high on an isolated hill above Llangollen and reached by a steep climb. From the top the views of Llangollen and the Dee Valley are stunning. This was said to be the possible burial site of the Holy Grail of the Arthurian legends, and was known to have been the 13th Century home of Madoc ap Gruffydd Maelor, the founder of Valle Crucis Abbey and it was possibly a stronghold for Eliseg, Prince of Powys in the 6th Century.

Llangollen is a haven for shoppers looking for interesting and unusual gifts. There are also many interesting walks in the town. The canal from the town to the Chain Bridge Hotel and Horseshoe Falls as an example.

Opened in 1862 the Ruabon to Barmouth railway steamed its way through the Welsh countryside. At one time it was possible to board at Llangollen Station and travel to London without a single change! the Railway closed to passenger traffic in 1965, and to goods in 1968 and over the next seven years Nature closed in on the buildings and track bed . However steam trains are once more to be seen in Llangollen Station thanks to the efforts of the Llangollen Railway Society.

A group was formed to renovate and reopen part of the line in September 1975, with just 60 feet of track which has now grown some 7½ miles along the Dee Valley passing wonderful scenery and giving a glimpse of how this 65 mile journey must have looked like in its heyday.

Trains operate during weekends virtually all year and daily from June to the end of October. During the summer, steam trains are mostly used.

From Llangollen Wharf you can embark on a 45-minute horse drawn trip or a two hour trip on the traditional Canal narrow boat, which takes you through the Vale of Llangollen and across the Britain’s biggest aqueduct at Trevor. Towering 126 feet above the river and built by Thomas Telford it is a masterpiece of engineering. You will not be the first to experience this. For over 100 years, pleasure boats have operated from Llangollen Wharf – and the experience is as popular as ever. 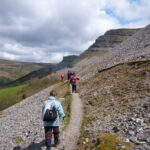 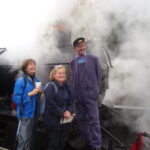 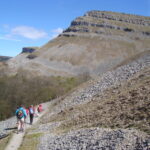 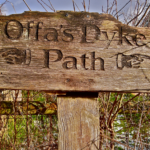 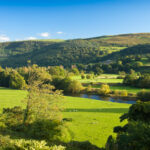 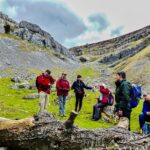 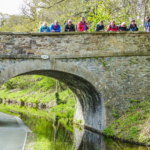 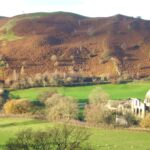 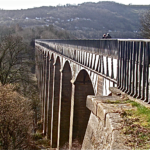 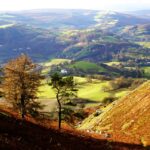 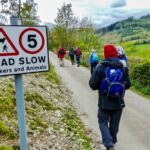 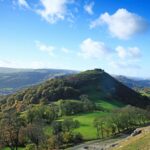 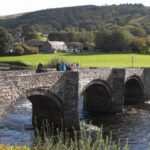 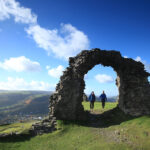 I thoroughly enjoyed my holiday in Llangollen. Mike was a great guide and the hotel excellent. Many thanks and best wishes Helen

Thank you Alan, thank you Barbara for arranging the holiday. Well organised. Mike Smart (walk leader) is very knowledgeable about the area and was able to give us a lot of information. The walks were fantastic. Hotel excellent at doing all they could to ensure the safety of their guests. The food was good and the room was lovely.

The whole weekend was great. Both Mike and Amy were very good guides. We were also blessed with some lovely weather and the hotel is excellently located with ample parking. My first but definitely not my last Secret Hills trip.

Really enjoyed the weekend – everything was good – Walk leaders – Mike and Amy both great and walks absolutely beautiful and strenuous enough – loved the walking.

I absolutely loved the walking. Mike and Amy were excellent guides and the three walks chosen gave a wonderful opportunity to see this area at its best. As usual, I had to opt out of the very steep descent and Mike gave us a lovely alternative. I thoroughly enjoyed every moment of the walks. I can’t wait for my next break. 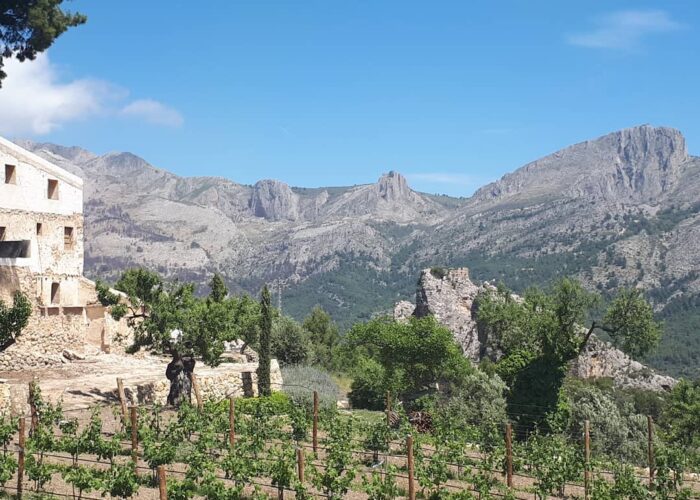 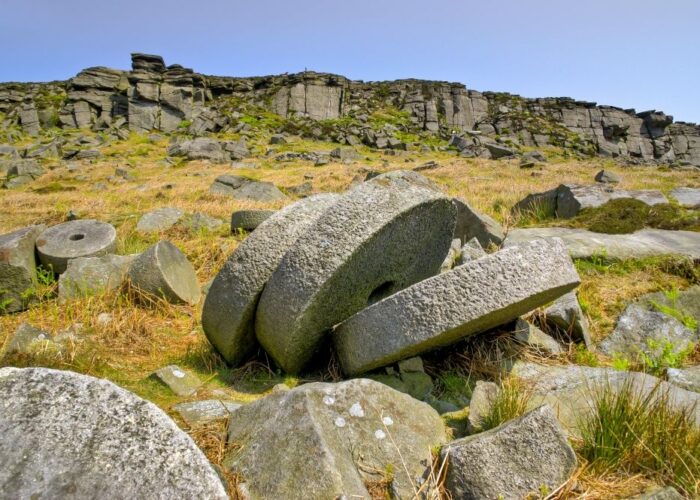