Walking in the sun, by the sparkling blue Adriatic as well as the lovely interior of the island of Brac- simply stunning, We call the holiday dazzling because at every turn the sea sparkles and the land. Great walking with the sea ever present. Our solos guided walking holiday shows you the best of the coastline as well as the beautiful interior.

Island Brac is the largest island of the central Dalmatian group of islands, the third largest among the Adriatic islands; area 394.57 sq km; population 13,824. It is separated from the mainland by the Brac Channel, from the island of Solta by the so-called Splitska Vrata (Split Gate) and from the Island of Hvar by the Hvar Channel.

Walking is a pleasure on this island – many old paths and roads criss cross the island and these make for excellent walking.

The limestone part of the coast is rocky and steep, while the rest is rather low and sandy (on the southern side from Farska to Bol, and on the northern side from Sutivan to Supetar).

The island landscape is dominated by a karst limestone relief, with numerous gullies, crevices, cavities, round valleys and coves. Milder forms of the relief, with brown Primorje soils (the most fertile on the island), are found mostly in the interior (especially between Lozisca and Nerezisca, as well as between Selca, Novo Selo and Sumartin).

Composed primarily of limestone and dolomite, the quarries of the island of Brac have been a source of stone for building decorative stonework for centuries. The old Romans have known its quality and used this very stone to build cities, amphitheatres, temples, palaces and graves all over Dalmatia.

There are no surface water streams on the island. Permanent water sources are provided only around Bol. Higher parts of the island (above 400 m) are covered with black and Aleppo pine forests; larger or smaller forests of Aleppo pine are found around all coastal towns and villages; dominant are dense evergreen underbrush 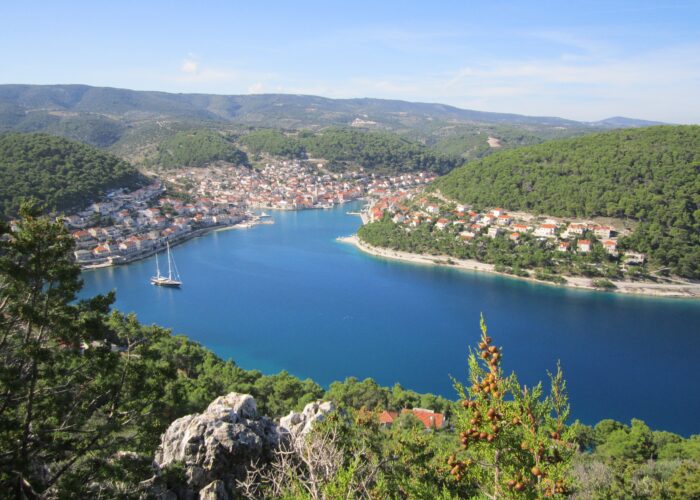